Zazie in the Metro 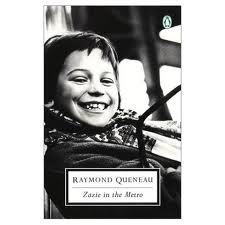 Well this book wasn't what I expected at all!

I really, really didn't like it. I was expecting to love it. Set in Paris, a French classic. It has instant appeal to me for those reasons alone. But that's all it had going for it in the end for me. The locations. Visiting the Eiffel Tower. Trying to get to Sainte Chappelle before it closed. Even Pigalle. And that got me to the end. I think if it hadn't been one of my 1001 reads, I would have given up and it would languish on the shelf partly read forever.

I did struggle with the book on many levels. Firstly I have no idea how it can be described as a children's book. I don't think it is. I'm not sure it's even YA. I'm not actually sure who it appeals to.

I realise that I seem to be in the minority. It was a huge success in France as soon as it was published, selling 50,000 in the first month, and a million since. It came in at #36 of Le Monde's Top 100 Books of the 20th Century. It was turned into a popular film within a year. It rates 4 stars on goodreads- 995 people have rated it for an average of 3.81. Clearly most everyone else "gets it" in a way I don't. And that's fine, but I do wish I'd liked it more. I expected to like it more. I expected to love it. This paragraph resonated with me as a summary of my feelings.

Zazie kept her trap shut. Events had got beyond her, she was overcome by somnolence, and she was trying to find an attitude which would be adequate, both to the situation and to her personal dignity, but she couldn't make it.

After all the concept had such promise. The book tells the story of Zazie Lalochere, a girl from a provincial village who goes to Paris to stay with her uncle Gabriel, a female impersonator in a gay night club. Zazie is shipped off to the capital for 36 hours so that her mother Jeanne can spend some time with her lover. What's not to love about that?

And the first page had me snorting out loud

'Hear that?' said the good lady to a little chap by her side, probably the one legally entitled to mount her.

But that was to be the last time that I found such mirth. The story was lost in the delivery for me. Even the introduction in my Penguin edition says

What is Zazie in the Metro about? Not much really.

I didn't really get to know or understand Zazie. I found her annoying and stupid.

I love learning new words in books but I found it so hard to differentiate between the incessant flow of neologisms and just words I didn't know. Some where obvious. Howcanaystinksotho. Others less so. Subtricate.  Inclitic urb. Although not all were unsuccessful, like noctivagrant miscreant. I love a bit of word play on the whole, but this was all a bit much even for me.

I can see why it is labelled controversial. I find it controversial now, and I'm sure it must have been more so in 1959.

And what of the title? Zazie in the Metro. Zazie dans le Metro in the original French. Zazie doesn't actually get in the Metro really because of a strike. Well, she gets carried through asleep at the end. What does it all mean? I don't know.

I haven't been so disappointed in a book for some time. Mind you I am still glad to have read it. It was set in Paris after all. I found it fascinating to learn about Raymond Queneau, the author, described repeatedly in the introduction as a polymath. Queneau was a co-founder of an experimental writing group called Oulipo. Italo Calvino and Georges Perec are two of the most famous members, even though both have been dead since the 1980s, membership continues after you die. Which makes me worry. I've tried and failed to read Calvino. I've long had Perec's Life: A User's Manual on the TBR without knowing all that much about it. Experimental fiction isn't my thing, I know that. And my experience of Zazie suffered because of it.

Thanks for dropping by and visiting me.

I've picked up a couple of books lately that really disappointed me and made me wonder "what I didn't get" when everyone else raved about them.

I honestly have never even heard of this book but based on the description it sounds like it *should* be an interesting read...however with the quotes you gave and more info about the book I was wondering too how in the world it could be considered for children. I'm impressed you finished it!