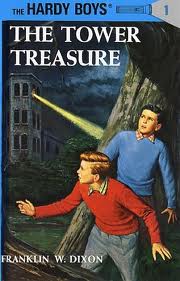 It's tricky taking on a childhood icon. Will it have stood the test of time? Will it look dated? Twee? Clunky?

I was really interested to read the first of the Hardy Boys adventures, The Tower Treasure recently. Turns out Frank and Joe Hardy had many surprises in store for me.  Firstly, even though I have quite a number of Hardy Boys books that have survived from my childhood, this, their first book wasn't among them. Thankfully I'd recently come across a 3 in 1 volume of Hardy Boys stories (The Tower Treasure, The Secret of the Old Mill, The Haunted Fort), so still had it on hand.

The next surprise was that this book was first published in 1927! I suspect that I had no inkling of this when I was reading them in the early 70s. Whilst I definitely remember reading Hardy Boys books, and have some old hardbacks to prove it, with my name written on the endpapers in my childish hand, I don't remember the individual books.

The biggest surprise was that the author Franklin W. Dixon didn't actually exist! I certainly had no inkling of that in my childhood readings. Dixon, and indeed the Hardy Boys, were the creations of  Edward Stratemeyer, who with his Stratemeyer Syndicate created a vast amount of my childhood reading. Nancy Drew, and The Hardy Boys that I was reading, as well as The Bobbsey Twins who I didn't read, and two other series I hadn't heard of- The Rover Boys, and Tom Swift books. I love the quote in the Wiki article on the Stratemeyer Syndicate that libraries refused to carry these books for decades- apparently they considered them to "cause a mental laziness, induce a fatal sluggishness, and intellectual torpor"! And I thought I was like that because I grew up down the road from a smelter and my lead levels were too high! It was all those books I read the whole time.

A number of authors wrote under the name Franklin W. Dixon, but the first, and longest serving was Canadian journalist Leslie McFarlane, who wrote what are seen as quintessentially American books. He received $100 for each book, or $85 during the Depression, and was never paid any royalties! Apparently Mr McFarlane was glad for the work during hard times, and happy to make lots of money for other people. The Hardy Boys series still sells over 1 million books a year in the US, with 100, 000 of those being The Tower Treasure.

And so what of the book itself? It is a somewhat dated, but still charming adventure for young readers. I'm sure the age of the readers for these books will have declined with the generations. My 10 year old has expressed an interest in reading The Haunted Fort because he started reading a copy in the school library, and thought it seemed exciting. The language was definitely that of an earlier time. There were constant references to school chums such as Chet Morton. I think as I will never have a daughter that I will have to call my next female dog or cat Iola- it's such a swell name.

The Hardy Boys are clean cut, earnest, hard working and diligent. They use words like swell, chums, hobnob and cahoots. They go to school willingly, are saving for their college fund, attend church on Sundays, and are pleased when their father takes them to see a performance of The Merchant of Venice during their detective trip to New York. None of which is bad. It's interesting to note that the Hardy Boys books were "modernized" by Edward Stratemeyer's daughters in 1959. They commissioned rewrites to remove racial stereotypes, speed up the plots for modern audiences- 1959 was already feeling the effect of the television age, and remove dated references. The Tower Treasure shrank from 240 to 180 pages! It was this 1959 rewrite that I read as a girl in the 70s, and a slightly older girl in 2011. Applewood Books publishes the older, original versions of these books- how fascinating it would be to compare them.

Still, I love that Mrs Robinson on hearing some bad news needs to be revived with "smelling salts and her special medicine". Brandy? We can only hope! I can only presume that more passages like this were removed:

There was a rustle of skirts, and Adelia Applegate appeared. A faded blond woman of thin features, she was dressed in a fashion of fifteen years before, in which every colour of the spectrum fought for supremacy.

Thanks Kath. I had no idea that you had written a book and were so famous. I had to google it, and must say I'm impressed with the title and now you balance it in Switzerland. I think I need to read it.

I've never experienced the Hardy Boys or Nancy Drew and I'm really not sure why. I wonder how this would hold up to a first reading for someone my age.

I think it would hold up Kathy. The mystery is interesting enough to hold your attention (although a little predictable in parts, but then mysteries used for kids often are). And then the story is swell.

I started reading these books as soon as I could read. They were my first chapter books, and I have many fond memories of summer afternoons on a porch devouring one after another! I knew even then that the vocabulary was that of another time... a roadster?

Thanks for the memories!

I read a lot of them too Genie. I don't remember roadster from this book- but they constant referred to Chet's car as a jalopy!