It's not often that I prefer the movie version, and the Jim Carrey movie version at that, to the book. I am usually rather sceptical of any Jim Carrey offering. I was however pleasantly surprised by the recent movie version of Mr Popper's Penguins. I knew nothing of the story, indeed I've only heard of the book in the last few years. It wasn't all that well known in Australia prior to this years movie. I took my son one afternoon during the school holidays, the cinema was rather packed with children who all laughed away at the movie. I got the occasional laugh too. Farting, honking penguins slip sliding around will always be funny.

It turns out that the move version bears scant relation to the book. The characters do generally have the same names. There is indeed a Mr Popper who receives penguins in the mail. The movie Mr Popper lives in New York, where he is separated from Mrs Popper, and has some sort of mercenary real estate job. He lives in a flash apartment and has buckets of money. 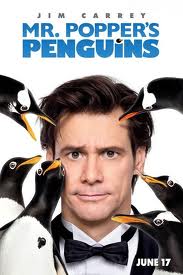 The Mr Popper of the book is rather poorer, working hard to support his family as a painter and decorator in Stillwater. He too receives a penguin in the mail, although from a different source than the movie version.

Perhaps because I didn't grow up with this book, it seems a bit dated? I read this book aloud to my 10 year old son for bedtime reading after we had seen the movie. We finished it, but he was never that enthused, and I must say neither was I. As a read aloud book it was rather tricky- too many times Papa and Popper where in the same sentence! 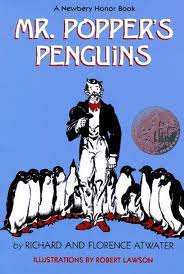