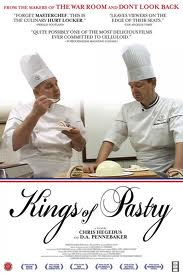 A fascinating documentary about 16 pastry chefs competing for the right to become a Meilleur Ouvrier de France (MOF). The MOF is a competition held every four years over a wide range of skills. Thankfully the filmmakers chose to feature pastry chefs and not something like locksmithing. Not that the world doesn't need good locksmiths, but I'd much rather watch a documentary about pastry. Although any challenge undertaken with this much enthusiasm and passion would make for great viewing.


The film follows 3 of the 16 participants heading to Lyon in 2007 for the gruelling three day competition, where they must produce a veritable mountain of precise and delicious goods, with their every action watched over by the judges. The participants have trained and practiced for this event for years, refining techniques and recipes, designing astonishing works of art that they must then replicate during the intensely timed and controlled competition.


The judges are naturally MOF themselves, and of course get to partake in the pastry judging. At one stage they are told to judge each pastry separately- to think of each one as a moral dilemma! You have to love and admire the French approach to food, life and what actually constitutes a moral dilemma.

The competition is full of drama and spectacle, and emotions run very high amongst both the contenders and the judges, who are all equally passionate about the art, science and beauty of pastry. Those who reach the seemingly impossibly high standards become a MOF and earn the right to wear the tricolour stripes at the neck of their chefs jacket.

This post is linked to Weekend Cooking, a fabulous weekly meme at Beth Fish Reads.
Posted by Louise at 20:34

This is a must watch for me. I watch every baking challenge or baking related show on the Food Network, lol.
I hope my library has a copy of this. As I commented on BethF's post, I use my library as my main resource to rent films because all the Blockbusters around us have closed, and we no longer have a Netflix account.
Wish me luck at the library :)

I have never seen a baking competition before. I actually did hear about this online earlier, but forgot all about it, before I had the time to watch it. Thanks for reminding me :)

I saw a TV show about this competition once...it is really so stressful.

I meant to add this to my must watch list a while ago. Thanks for the reminder.

I hadn't heard of this movie but it sounds like something I would really enjoy. Pastry, France, drama. Right up my alley.

I've not heard of this before, but it does look interesting.

This is cool. I had no idea such a competition existed. I have to see it!

I saw this a few weeks ago and thoroughly enjoyed it. There is so much pressure on those chefs. I gasped out loud when the spun sugar broke after all those hours of work. My favorite didn't win but it was so interesting.

I love watching baking/cooking challenges on tv. Somehow I missed this one.
Here's My WC

I loved this movie the drama was amazing.

☺ I try to stay away with the cooking comps because most of the time, while watching them work their wonder on an recipe, my stomach growls in protest. hehe. Enjoy the show.

I saw this on French TV a couple years ago. I enjoyed it!

I saw this on French TV a couple years ago. I enjoyed it!

I know I would love this! Cooking competitions are so much fun to watch.

Off to Blockbuster online to see if I can get a copy of this!

Oh, we recently watched this -- isn't it a riot? The weird candy structures that they had to build on the desserts were hilarious and awful and kind of cool all at once.