Since my son was born 10 years ago I've read one book every year on the same day of the year. Not surprisingly it has been Twas the Night Before Christmas. For the past 9 years I've used a thick board book edition that I bought even before I had a child.

This year I bought a beautiful new version illustrated by Australian Robert Ingpen (that link shows most of the gorgeous images from the book at the moment, I hope it will stay that way). 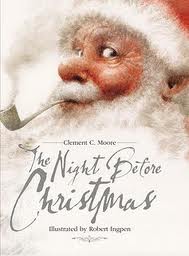 This new version has a page at the beginning telling us about Clement Clarke Moore (1779-1863) who was one of early New York's wealthiest men. He was a professor of Greek and Oriental literature at Columbia College, and his proudest academic moment was writing the first American Hebrew dictionary. But it seems he is most remembered now for this wonderful poem written for his nine children.


Happily my son is still young enough to enjoy, nay, be excited by this shared ritual reading with his mother, and he bounded along to bed on Christmas Eve buoyed at the prospect of continuing our Christmas reading tradition.
I was quite surprised on reading this newly illustrated version of a familiar tale to stumble on a few words:
On, Comet! On, Cupid!
On, Donder and Blitzen!

Donder? Who is Donder? I have been more used to Donner in previous versions. A quick Google and it seems that the original version my have been

On, Dunder and Blixen!

One book that I read for the first time this year was J.R.R. Tolkein's The Father Christmas Letters. 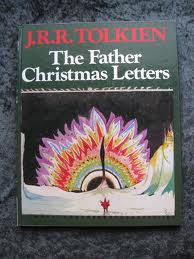 I'm not the biggest fan of Tolkien (ssssshhhh), only having read some of The Hobbit, and never even starting The Lord of the Rings (even the movie versions are a bit much for me), and so I only came to hear of this book this year as I was casting about looking for some new Christmas Reading.

This lovely book from the 1970s reproduces most of the letters and drawings that Tolkein (as Father Christmas) wrote to his young children over a period of over 20 years, from 1920 to 1940, in response to their letters to Santa. Sometimes these letters were found in the Tolkein house on Christmas morning- dusted with snow and bearing stamps from the North Pole, sometimes the postman brought them.

They form a remarkable record- of fatherly devotion, of an inventive mind, and also of the times. The Noth Polar Bear contracts Whooping Cough in 1930. In 1931 Father Christmas is busy collecting food, clothes and some toys for the children of those effected by The Great Depression, and he reminds the Tolkein children of the terrible number of poor and starving people. The last letter, in 1940, has Father Christmas saddened that the number of children able to write to him is dwindling due to the "horrible war".

I think I like the idea of this book more so than the actual book. Perhaps because not all the letters are here, it seemed confusing at times, and I found myself rereading sections or thumbing back trying to work out what Father Christmas was referring to. But I can't help thinking how astonishing and wonderful it must have been for those four lucky children to get their own letter and drawings from Father Christmas each year.