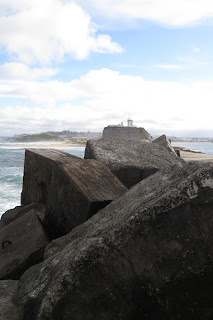 I grew up in Newcastle. Well close enough. Much easier to say Newcastle, so people know where you mean. When I grew up the boys all went off to work at Comm Steel and BHP, major industries that don't exist anymore. Newcastle has been the inspiration for a number of songs. The Newcastle Song. We all grew up knowing "Don't you ever let a chance go by."

So you can imagine my surprise when I was catching up on a recent SMH article, and saw this written bold and large:

What? Really? Hipsters? Can a deconstructed vegemite toast really be the basis of all this acclaim?

and is welcoming a growing literary scene.

Sure. That bit is easy. I've loved attending the Newcastle Writers Festival three times over the past few years, and I'm aware of more and more writers and poets calling Newcastle home. The hipster claim appears to be old news. And I'd still agree that "you’ll see more hipsters in the first ten meters of Crown Street, Surry Hills than you will in a week in Newcastle".

One of the interesting things that the article did was include a list of Newcastle Novels, and even though the lists have been light on here for a while, I knew I couldn't let this chance go by...

Sadly I haven't read any of these books. There's always so much reading to be done.

Glad to see you back making lists Louise :-)
I haven't read any of those Novocastrian novels either, not sure how I missed the Halligan though as I went through a stage a while back & read a lot of her books.

Thanks Brona, it was nice to crack out a list again! This was a totally obvious one for me.

Whispering Gums was stymied by my comments section but tried to say this:

I have read two of those novels - the Halligan (my first introduction to her with my reading group, and the first Michael Sala, which I've reviewed. I've read about the Cusack, the Harrower, and the second Sala. But I'm mystified about Paterson. William Carlos Williams is an American writer, so I checked. The book is set in New Jersey?

Well that's embarrassing! William Carlos Williams did sound familiar, and I thought of as a poet, but I should have checked. I wonder what the book should have been?

Okay, I was going to express my perplexity at seeing WCW on your list, but I see it has already been addressed.