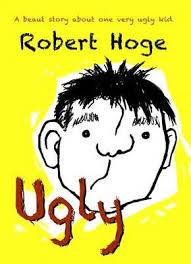 I bought Ugly a few months ago when I first saw it on a bookstore shelf. This was quite some time before I knew I would have the opportunity to see Robert Hoge speak in person. I knew of Robert from his Australian Story a few years ago, and he had already published an adult version of his memoir Ugly in 2013 which I had wanted to read but never bought. Here was a kids version of that book. I was intrigued.

I did get to see Robert speak a few weeks ago at an amazing Sydney Writers Festival Primary School Day last month (along with Emily Rodda, Sally Rippin, Gus Gordon and Tristan Bancks). Of course it was a great day, and Robert was a great speaker. Sadly I didn't get to read Ugly before I heard him speak but I was prompted to pluck it from the TBR pile after I did.

Ugly is an extraordinary story as you might expect. Robert Hoge was born in 1972 with a large facial tumour and deformed legs. In those days pre-ultrasound his birth of course came as a surprise. It is heart-breaking to read how his parents initially rejected him.

'I didn't feel anything for this baby,' she (his mother) wrote in her diary. 'I had shut off completely. I had made up my mind I was not taking him home.'


Devastating. A sign of the times perhaps too? But the family did take him home, mainly at the urging of Robert's four older siblings. He was lucky to grow up in a close, loving family.

A man's home might be his castle, but the four fences of that yard became my mother's prison. After fighting so long to keep from bringing me home, Mum was reluctant to take me out again once she did. She was not ready to face the verdict of strangers when they saw her strange child. For a long time, the only place I went as a baby was to the hospital for various appointments. No shopping trips. No playground visits. Just appointments and Fortress Hoge.


It was fascinating to get a slight glimpse into the surgical care of the time. Robert's major operations were planned with the aid of skull X-rays and life size photos! No CTs, no MRIs, no 3D reconstructions that modern surgeons use and rely on. The 70s were a simpler time, Robert broke his prosthetic leg in the first week of school and it was able to be welded together at the local petrol station!

Robert was always keen to compete, and keen to excel. Naturally this was difficult, he wasn't allowed to play rugby or cricket like he wanted. He wasn't even able to swim for many years because of his ongoing surgeries. He was able to have a great childhood though with more than enough boyhood adventures.

He was to grow up to become a journalist and speech writer, and his many years of experience shine through, Ugly is gripping and well written. Ultimately, Robert's story is about acceptance, ugliness, truth and beauty, he realised that little kids may accept difference quicker than anyone.

Young kids are naturally very accepting of new and different things. The kid with a squishy nose and strange legs isn't that surprising when you're three years old and you hear stories about talking bears sitting at a table eating porridge. It's only as kids get older that they start to know what's normal and what's not.


Robert had learnt early on that our faces are our admission tickets into the world- they let us "look out and know others and let others know us".

I knew I was ugly. But everyone is uglier than they think. We are all more beautiful too.

Thanks for this great review Louise. I've been very curious about this book. Now I'll be able to recommend this book confidently at work :-)