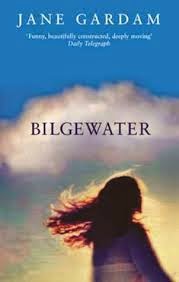 Bilgewater is a very unusual book. I'm not quite sure what to make of it really. I did quite like it on some levels, and at other times it drove me to distraction. The story of Marigold Green, a 17 year old girl living with her father, who is a Classics teacher at a British boys boarding school. Marigold's mother died when she was born, and she is called Bilgewater by the boys, a mondegreen of Bill's daughter.


My mother died when I was born which makes me sound princess-like and rather quaint.


Bilgewater has perhaps the worst self-esteem of any character I've ever read. She is always referring to herself as "orange-haired, short-sighted, frog-bodied".


Ugly, quaint and square lay I, happy and at home where I belonged.


And yet after she gets some new jeans she sees a "tall thin girl with rather good legs" in the mirror. Marigold (I find it hard to call her Bilgewater) has a good relationship with her somewhat distant and aloof father, and a warmer relationship with the matron Paula. Still she is a somewhat lonely, eccentric teenage girl who really does want friends. She is also preparing for Cambridge entrance exams. The story that develops is rather odd, and becomes gothic and farcical towards the end. I suspect that early on I was put off by the description of one of the other masters and was uncertain of what was to come, but perhaps that's my 21st century reader view, having seen too many Royal Commissions into Child Sexual Abuse.


Jane Gardam was a completely new author to me. Heretofore unknown. Which is sad really as she has written many books for adults and children since she began writing the very morning that her third child went to school. Her first book, a children's book - A Long Way from Verona was published in 1971, and she has since published more than 30 novels for adults, children and also short stories.


"I couldn't write until my youngest child went to school, and then I began- the first morning- and I've never stopped. For years there was no man in the house when my husband was off on law cases in the Far East. Without writing I would have been bored and unfaithful, maybe both, and the children would have been hideously over-protected."


Jane Gardam is clearly very intelligent and I certainly didn't get all of her allusions and references.


I still couldn't use the toothpaste because of James Joyce but I washed all over.


She has been nominated for the Booker and Orange Prizes. There was enough of interest in Bilgewater for me that I'm definitely interested in reading more of Gardam's work- both her writing for adults and children. Although it seems that Bilgewater straddles both categories, or perhaps defies them. The British Council tells us that Bilgewater was originally written for children, but now redefined as adult fiction . I did settle into her style in the second half of the book, and enjoyed her intelligence, wit and humour very much.


I began to notice the beginnings of the prosperous terraces all now in darkness with the curtains pulled back for morning- last job of the middle-class day, all the televsision plugs pulled out.

Thank you for humoring me and add this one to our 1001 group reading schedule. I delight in reading people that are light-years-smarter than I am; I adored this one.

I really did enjoy discovering a new intriguing author, I just didn't totally love this book- but I can really see that Jane Gardam is very intelligent, and her writing is worth pursuing. I'll look forward to A Long Way from Verona, but I know you've already read it.