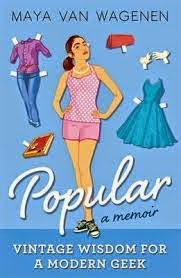 I really have no idea what made this memoir by a Texan teen about her quest for popularity amongst the tribes of the eighth grade jump into my hands recently. After all it's never been one of my quests, and I am somewhat distant from teenage angst. Perhaps it was the cool retro cover with the suggestion of paper dolls. Perhaps it sounded a bit like Populaire, an utterly delightful French movie that I watched on a plane last year. Whatever, it was I'm very glad it did. Popular is charming, and I'm sure will be popular.

Maya has always struggled a bit socially. She's a nice girl, vegetarian since she was 8, and understandably anxious since her younger sister died when she was six. Maya has some friends, but she's a bit shy, and finding the onslaught of the early teenage years a bit difficult. Before she was born her father bought a second hand book- Betty Cornell's Teenage Popularity Guide, originally published in 1951. The book resurfaces during a household clean up when Maya was 13 and about to start eighth grade. As improbable as it sounds Maya decides to follow this 60 year old advice to teenage girls, almost to the letter and document her social progress over the year. Rather amazingly in this oversharing world she keeps her project a secret from all but her close family.

And so Maya begins a year of sensible eating, good posture, girdles (yes, girdles) and wearing vaseline as eyeshadow. And she is slowly transformed by the process in unexpected ways. It's not always easy.

It's literally painful. I look like someone out of an old movie, or a patient in a nursing home. Tears well up in my eyes, and I bite my lip.


I really enjoyed my time with Maya and Popular, even though I am closer to Betty Cornell's era than Maya's. Besides being a slice of modern American teenage life, it also gives us a glimpse of life in the border town of Brownsville. It is a far, far different place to suburban Australia. The violent drug war between Mexican drug cartels and the Mexican military are carried out within sight of the town. There are frequent lockdown drills at school, FBI drug operations in nearby streets, and students required to use mesh backpacks for school to discourage the carriage of weapons or drugs. And all the other inconsistencies of modern America.

In Brownsville tampons are seen as immoral. So is using birth control. What I don't understand is that teen pregnancy is generally accepted.


As it must logically be I guess if you think birth control is immoral. Thankfully all that is not my world. Maya also introduced me to the concept of French Toast Casserole. WOW. Bread and butter pudding by another name I guess. And raspas- Mexican snow cones. If only I knew about them when I was in Houston. I'll have to go back someday.

Maya Van Wagenen was named one of Time Magazine's 16 most influential teens of 2013 (an interesting list but does anyone really care what Justin Beiber does any more?), and was interviewed on the Today show (who got the decade wrong- but still, they tried). I'll donate my copy to my local library so that local girls can enjoy Popular too.
Posted by Louise at 19:00

Labels: Books You've Never Heard Of But Just Have to Read, Texas

I've wondered about this one - it looks interesting. I believe they're bringing out a new revised Betty Cornwell soon too!!