Cat Out of Hell 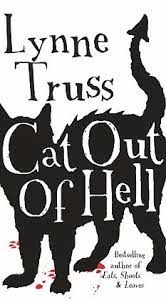 I have a house full of perfectly good and largely unread books, and yet sometimes I get caught up in the   buzz about a book and buy it. Usually the story ends there, but sometimes, just sometimes I read the book that week. Cat Out of Hell was one such lucky book. I'd read a few glowing reviews that had made me quite curious. Then there was a copy sitting in my local bookshop when I was at a low ebb of   willpower.

Somehow the reviews I had read didn't really manage to convey anything of the story really or even the genre. Somehow Cat Out of Hell appears to be comedy/horror. I definitely read Talk to the Hand, and possibly read Eats, Shoots & Leaves way back when, which was wonderfully comedic so it's probably not surprising that Lynne Truss has managed to infuse such humour in a very odd story about satanic cats. If it was a bad TV show it would be called When Good Cats Go Bad.

The first 10-20 pages of Cat Out of Hell are quite confusing, but do stick with it, it soon becomes a captivating page turner. Told in a variety of formats, straight narrative, screenplays, emails, and descriptions of photos- Cat Out of Hell has a most unusual structure.

Mostly narrated by a retired, recently widowed librarian, Alec Charlesworth. Alec ran the periodicals department at a university library in Cambridge for 30 years, and lived a rather quiet life. After his wife's death he takes a cottage on the coast of North Norfolk to be alone with his grief.

Having recently suffered the loss of my dear wife, I chose the location with care- isolation was precisely what I required, for I was liable to sudden bouts of uncontrollable emotion, and wished not to be the cause of distress or discomfort in others.


He soon discovers a improbable, unusual and yet "terrifyingly plausible" story about a man called Wiggy and a talking cat called Roger. And after that it gets really strange! Lynne Truss takes the old notion of cats having nine lives and runs with it. It's moving, scary and laugh out loud funny at times.

The back cover advises that the book "demands to be told in a single sitting". That would have been nice, but I never manage to read books in a single sitting, well the occasional picture book perhaps, but sometimes I can't even make it through one of them. I read The Cat Out of Hell over 4 days, not in a single sitting- but it kept me up past midnight two nights in a row. It is such unexpected fun, but certainly won't be for everyone.

The Cat Out of Hell is my first outing with British Isles Friday.

This sounds interesting- different- I'll have to look for it.

I've seen this book everywhere. I'm not sure it's my cup of tea though.

I enjoy books with odd formats but don't usually read horror. Horror with humor might work for me!

Thanks for joining in with British Isles Friday. I love that the main character of this book was a periodicals librarian at Cambridge!

I'm still not sure that this book is for me, but I enjoyed your review - thanks! :)