1001 Children's Books You Must Read Before You Grow Up 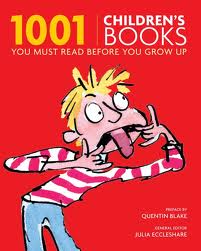 I can't really believe that I haven't written about this book specifically before, as it's become a rather large part of my life. Back in 2006 1001 Books You Must Read Before You Die came out. Of course I bought it. Naturally I browsed it quite a bit and idly dreamed that one day I would read all those books, but I really knew I wouldn't.

Then in 2009 1001 Children's Books You Must Read Before You Grow Up was published. I was very excited about it, and requested it as a Christmas present. I poured over it, reading much of it over the next few lazy post Christmas days. Then I knew. I wanted to read all of these books. (The list is available here if you want to have a peek). So I decided to do it. And started my quest. I even started a group at Yahoo to see if anyone else wanted to join me on my quest, and happily they did.

I can't remember how many of these books I'd accidentally read before embarking on this quest, but now I've read 206/1001, which is pretty good as quests go I reckon, and the fire is still burning bright. Back in 1999 I started on a quest to read all of the Booker Prize finalists, a quest which was fun, but has sadly stalled for the time being. I hope I'll get back to that one day, although of course the challenge will be all the larger as it grows each and every year.

So far my 1001 quest has taken me to some rather amazing places. Quite a number of classics that I should have read before- Jules Verne's Journey to the Centre of the Earth, Kenneth Grahame's The Wind in the Willows, and Alexander Dumas' The Three Musketeers. And I have discovered many wonderful authors new to me- Lois Lowry, Eoin Colfer, David Almond, E.L Konigsburg, Martine Murray. All of these books are designed to appeal to children of course, but there is much food for thought and enjoyment for the adult reader as well.

My major disappointment with this book is that quite a number of the books are unobtainable to some extent- some are out of print, but that just really adds the thrill of the chase. Many though are not available in English, indeed never appear to have been translated. While I can struggle through the occasional picture book in French, I really am not up to reading larger tomes in Catalan, Polish, Spanish and all the Scandinavian languages. What exactly is the point of including those? It's rather frustrating, and I hope that one day a revised edition will be released where the books are at least theoretically obtainable in the English.

Will I ever get to grow up? I don't know. If I ever do perhaps I will move on to the 1001 Books You Must Read Before You Die? Although even that has become more difficult. I see that there are now three editions- the original 2006 edition that I have, which was then updated and revised in 2008 and 2010. So there aren't 1001 books anymore, there are 1294 books. That old TBR never gets any easier does it?

Ha! You're just like me with challenges!! Good luck :-)

I enjoy your reviews for kids books as it helps me with my work - I trust your recommendations and pass them onto customers!