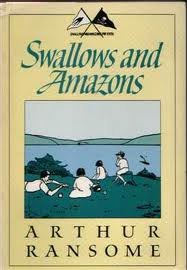 Wholesome. That is the over-riding feeling of tone I got from Swallows and Amazons. Don't get me wrong, I liked the book, in fact, I really liked it, but it definitely evokes times gone by. More wholesome times. Times when 4 children could go camping for two weeks on an island in the middle of a lake, without their parents. So Wholesome they wear their shoes and stockings all the time, and even a tie whilst camping!

The other big words that I keep thinking of is Competent and Courteous. These kids are Competent. They can sail from a young age. Put up tents by themselves. Cook over an open fire. Catch and clean their own fish. And generally not get themselves into too much trouble, even if they think that they might have. I've been thinking about this aspect a lot. We don't seem to want competent kids any more. They are coddled and chauffered instead, their every moment planned, tracked and monitored by helicopter parents. Sadly, today we need movements like freerangekids to encourage parents to let their kids have what just a few decades ago was a normal childhood.

And the four Walker children are Imaginative. They aren't just four children camping as themselves. They have roles on board their ship, and they take these roles very seriously. Captain, First Mate, Able Seaman and Ship's Boy. And they are well versed in lore of the sea, and children's classic literature. There are several references to Robinson Crusoe, and when the children rename Mr Turner as Captain Flint, because they feel he is a retired pirate, the name they pick is a character from Treasure Island. Not a coincidence I'm sure.

The book gets off to a rather famous start. The children are pestering their mother to be able to go and stay on the island. Their mother has to write to the children's father who is away at sea, although I don't recall that we ever really know why. Is he a merchant seaman? Is he at war? Wherever he is, communication is reasonably quick, and the response is predictably famous- "

Better drowned than duffers if not duffers won't drown." Hard to imagine a modern father feeling that it was better to be drowned than be a duffer. I know that it was said in moderate jest, but still....
The action is a little slow at the start, and there is a lot of sailing terminology to get through early on. I now know the nautical meanings to simple words like thwarts and painters. This book has a wonder non-nautical vocabulary as well. It's not every book that has wonderful words such as walloper, assegais, parley and pemmican. I am completely taken with the concept of pemmican. Both the actual stuff (and how fantastic is it that there is a wedding pemmican?), and the use of it within the story. I love that the children swap names for their ordinary tinned meat, and so it becomes pemmican that they have brought with them on their journey.
It's wonderful to see that this book still finds an appreciative audience in more modern times. There is an Arthur Ransome Society, only set up in 1990, to keep his books and the types of activites portrayed going. The boats that inspired Arthur Ransome are on display in the UK it seems, and we can peek at them on the internet through modern magic. I'm hoping to get Master Wicker to read this sometime soon. I think he'd enjoy it. I feel I would have loved it as a kid. The story is close enough to that of the first Famous Five (1942) that I had evil thoughts about Blyton possibly taking inspiration from Ransome's work. After all you only really need to add a dog to get the basic Famous Five story.

Does "wholesome" equal "boring" to kids today? Not sure.

No, I'm not sure about that either. It's not for my son. He was very happy with the wholesomeness of Enid Blyton, and I suspect he would like Swallows and Amazons too. Not sure if it would be that way for most kids.

This only just came across my radar. Thanks for your great review. I am going to keep an eye out for it.

It's a great read, I hope you enjoy it when you get to it.