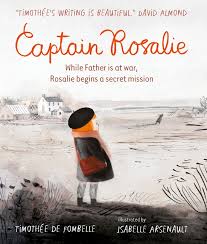 I've been meaning to read Timothée de Fombelle for some time. He's probably most famous for his Toby Alone series, about little folk living in trees, which I have in the house somewhere, but it's a big chunky book and I knew I wouldn't get it finished for Paris in July. Captain Rosalie is a delightful little morsel, and I easily read it in July, but then dragged the chain with blogging about it. An illustrated story for older readers, Captain Rosalie is not a picture book in the traditional sense.

Captain Rosalie is a young French girl, 5 and a half years old. Her father is away fighting in the trenches of the First World War. Her mother works at the munitions factory. Rosalie is not yet old enough for school, but her mother has nowhere else to take her, so Rosalie spends her days sitting at the back of the school room drawing pictures in her notebook. Or so it seems. Rosalie has other plans.

It is 1917, and every morning the schoolmaster reads aloud progress of the war from the front page of the newspaper. "The master always gives us good news, never bad."


He tells them that they must think of our soldiers who are giving up their youth, their lives.

At night Rosalie's mother reads her the letters her father has written home from the front line.

Delightfully illustrated by French Canadian Isabelle Arsenault, who makes the most of Rosalie's flame red hair. It was initially published in French in 2014, and in English in 2018. 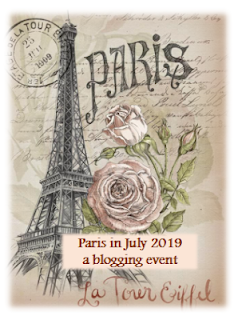 Labels: Books You've Never Heard Of But Just Have to Read, In Translation