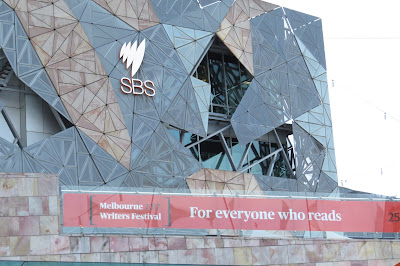 I've long been a fan of Melbourne Writers Festival. I attended my first MWF back in 2007, but my second wasn't until 2012. Happily since then I've been able to attend most of these annual delights of bookdom.

Melbourne is definitely my favourite Australian big city festival (well of the two that I've been to so far). It's so accessible. Mostly all held around Fed Square, the transport is easy (even if you don't get to stay across the road like I do...), it's so compact, you can easily do back to back sessions.

Plus you're in Melbourne. Lots of opportunities for yum cha, cafes, dinner. Eat Melbourne 2017 is in the pipeline, in the meantime we can revisit 2016. And the art galleries are fab too, I caught a few amazing exhibitions this year. More to come on that. And I caught the start of Melbourne Fashion Week which was much more fun than expected.

This year I saw an astonishing range of Australian and International writers.

Sadly, of course I missed many writers that I would have loved to have seen, including

But you just can't be everywhere at once.

I am particularly keen to read many (most) of the authors that I saw. Some of them were completely unknown to me before. I was particularly blown away by Angie Thomas' YA Keynote Address. I do hope to do a blog about her session soon(ish), and a number of others, but I tend to be bad at that. I've already started reading The Hate U Give. I also particular keen to read Kyo Maclear, Melissa Keil and Hannah Kent.

The Top 20 MWF Bestsellers at the Readings Festival Bookshop. Writers festivals always give me hope that maybe the world isn't really going to hell in a hand basket, lots of clever, involved people are buying and reading those books.
Posted by Louise at 21:15

I always despair of the state of the world until I go to a conference and hear writers and readers. Then I have hope again.

I see only four names on your list that I know. Oh dear. And two of them are American. Oh dear.